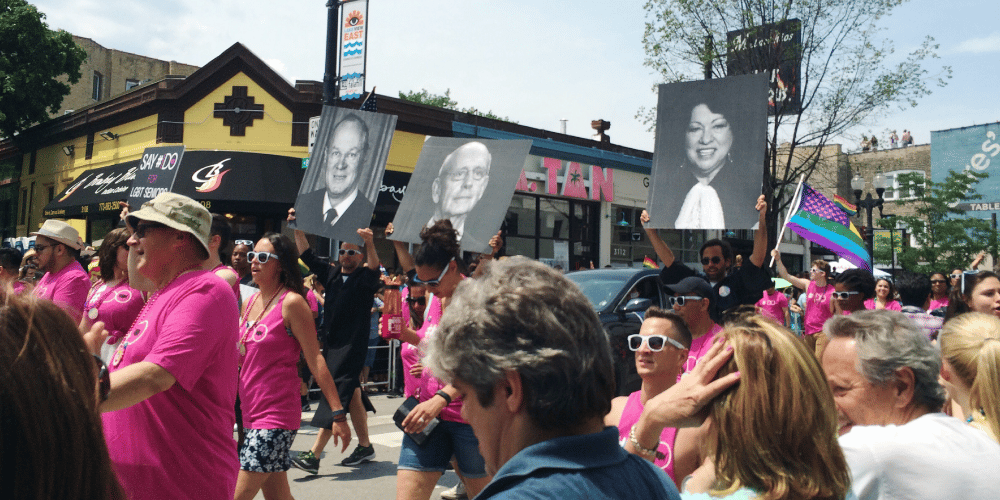 Today, Taproot Foundation’s offices are closed to celebrate a special holiday: Matt O’Grady Day. If you haven’t heard of it, you’re not the only one. The first time I saw this day on the calendar as a brand new Taproot employee, I was more than a little concerned that I had somehow been missing out on a national holiday my entire life.

But as I soon figured out, this day is unique to Taproot. It’s the wedding anniversary of former Taproot staffer Matt O’Grady, who married his husband in California in 2008 before Proposition 8. Every year since, Taproot has taken this day to celebrate that marriage and the step forward it represented for civil rights. As a new staff member, it stood out to me as a powerful sign of Taproot’s commitment to ideals of equality and justice—and as a lesbian, I felt safe, supported, and grateful to be part of this organization.

Matt O’Grady Day quickly took on a more personal meaning for me. 2008 was a big year for the fight for marriage equality, as this day reminds us. It was a big year for me, too. I was deep in the trenches of a painful coming-out process—lonely, scared, and achingly afraid that I would never be able to get married. Like many LGBTQ youth, I couldn’t imagine a happy future for myself. If you’d told me then that I would someday work for an organization where honoring same-sex marriage is literally written in the handbook, I wouldn’t have believed you. It’s my second year celebrating this day now, but it’s no less surreal.

It’s also worth noting that this day comes at an important time of year. June is Pride Month—a time for celebration, yes, and also a time for remembrance. We grieved last week for the third anniversary of the Pulse shooting, and we honor the 50th anniversary of the Stonewall riots next week. This Pride Month has not offered a reprieve from attacks on the LGBTQ community, from a heartbreaking hate crime in the UK to ongoing examples at home. Only last week, a troubling poll revealed almost half of all Americans incorrectly believe that federal law protects LGBTQ individuals from discrimination. We still have so far to go. But when we intentionally take time to acknowledge the work that came before and the work left to be done—like on Matt O’Grady Day—the joy of progress tastes all the sweeter.

And what progress! We have one more important anniversary to celebrate this month: on June 26, 2015, the Supreme Court wrote same-sex marriage into law across the nation. “It would misunderstand these men and women to say they disrespect the idea of marriage,” Justice Kennedy wrote, bringing our country a step closer to justice. “Their plea is that they do respect it, respect it so deeply that they seek to find its fulfillment for themselves. The Constitution grants them that right.”

The mark of a new chapter

As for me? My own wedding will be on June 28, four years to the day after my now-fiancée and I wept in the streets at a Pride parade following that momentous ruling. My family will journey north to Chicago to witness my marriage to a woman—something I once thought impossible. And Justice Kennedy’s words will ring out over a crowd of our loved ones, gathered together in both celebration and remembrance.

So, on this Matt O’Grady Day, I am proud. Proud to be gay, proud to be marrying my fiancée, proud to be part of a community who sacrificed so much to make this possible. And I’m proud to work at an organization that takes this day to honor equality—and supports LGBTQ organizations every day.

I’ve got a wedding to get ready for, so I’ll leave it at this: happy Matt O’Grady Day to my fellow Taproot staffers, and to those everywhere who join us in celebrating, remembering, and fighting for a more just world.

Join the fight for equality. Tap into the power of pro bono by giving or getting support on Taproot Plus.