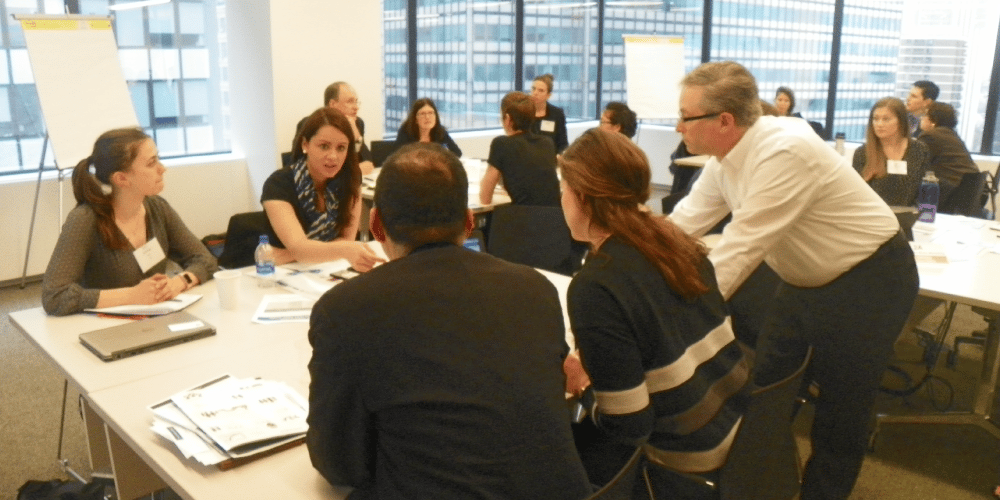 Speed Consulting, which–you guessed it–is structured like speed dating, is an exciting opportunity for nonprofits to meet with multiple groups of experts through a rotation of consulting sessions, in turn addressing a variety of challenges they face. In the case of the AIG Speed Consulting event, those challenges were all within the marketing and communications function. The event also served to strengthen AIG’s Communications team, as they leveraged their professional expertise to give back, creatively problem solve, and work with colleagues in a new context.

This year, AIG kicked off their Speed Consulting event with a reflection on the previous year’s success, featuring a few very special guests. Executive Vice President Tom Leonardi provided opening remarks and shared impressive statistics on the satisfaction both employees and nonprofits shared after participating last year. To echo that sentiment, representatives from Callen-Lorde, a past nonprofit participant, spoke about the lasting value this event had for them, citing a series of concrete steps they took to overhaul their internal communications program in the weeks and months that followed: “We were able to implement a number of initiatives modeled on AIG’s success without adding additional resources to achieve them. The results were of great benefit not only to our staff, but to all of our stakeholders.”

As the last session came to a close, it was already evident from both the energy in the room and participant reflections that nonprofits had benefited from the opportunity to tap a broad team of communications experts with global corporate perspectives.

“We’re walking away with solutions.”

“We’re walking away with concrete solutions for aligning our brand and messaging strategies,” one nonprofit noted after the event. “We’re anxious to get started on the work ahead.” Another organization found that the AIG teams helped reframe their challenge entirely, saying, “We now understand this as an opportunity rather than a problem, and have many communications and marketing ideas to use for tackling that.”

The event also revealed unexpected similarities between the nonprofit organizations and AIG, further bridging the sectors in common ground, and delivering on AIG’s commitment to building community.

“It’s easy to feel overwhelmed entering the day with these challenges,” remarked one nonprofit participant, “but we’re walking out with our heads held higher – our problems are not just our own, and other organizations and corporations experience similar challenges.” AIG employees felt similarly, one participant sharing that the event allowed them to take a fresh approach to what they do every day. “Suggestions for nonprofits could make a difference for us too. I have a list of things to take back and follow up on.”

The success of AIG’s second annual Speed Consulting event not only laid the groundwork for nine nonprofit organizations to execute on strategies that will maximize their impacts and advance their missions, it also inspired creativity and fresh collaboration within the AIG Communications team. Ultimately, this event fortified the broader connection between the corporate and social sectors in New York, and there’s no doubt participants will harness that momentum for new partnerships and deeper impacts going forward.

Connect with us to see how we can partner in building a strong pro bono program at your company.

This is a part of a series highlighting how impactful business pro bono support can be for nonprofit fundraising. Click here for information on the full series. Running...