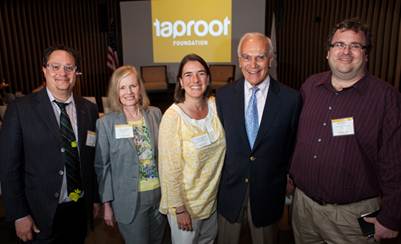 Last month, Taproot celebrated the 10th Anniversary of its flagship San Francisco office. It was an emotional night, with special guests including one of our seed funders, Bill Draper, Co-Chairman of the Draper Richards Kaplan Foundation and Reid Hoffman, Co-Founder and Executive Chairman of LinkedIn and Partner, Greylock Partners.

Reid shared why LinkedIn has partnered with Taproot, stating, “We are working with Taproot because we completely believe in bringing talent together to make projects scale and work effectively; the questions of expertise, knowledge of a particular problem domain, knowledge of management, and so on, are all necessary for achieving scale in the social sector.”

Also in attendance were 150 of Taproot’s supporters, nonprofit clients, and pro bono consultants. The highlight of the evening may have been the proclamation from the Mayor’s Office, declaring it Taproot Foundation Day on April 19, 2012 in San Francisco, though it’s hard to decide. 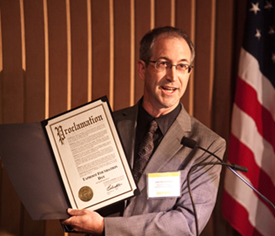 “It all started with a small and crazy idea, but we really nurtured that seed; that seen became our turnip and that turnip became Taproot. It could not have happened without all of you, critical to making ten years of accomplishments and more important, the ten years of difference in our communities.”

Some of the highlights from the last 10 years include:

Over 2,000 Service Grants completed, providing services valued at over $100 million to hundreds of nonprofits nationwide.Nearly 12,000 pro bono consultants engaged through our Service Grant Program to date, with an active pool of over 4,000.$1.6 billion in skilled volunteering pledged to the Billion + Change Campaign

Upon toasting to a decade of pro bono service in the Bay Area, Bill Draper stated, “Among all of the wonderful organizations we have enthusiastically supported, I can think of none more effective, more impactful, or more important than the organization that we are here to celebrate tonight…. Ten years old and the best is yet to come!”

As we celebrate the last ten years of pro bono success, ensure the future of pro bono is just as bright by encouraging your peers to participate in pro bono- whether their giving or seeking pro bono support it all makes a difference.