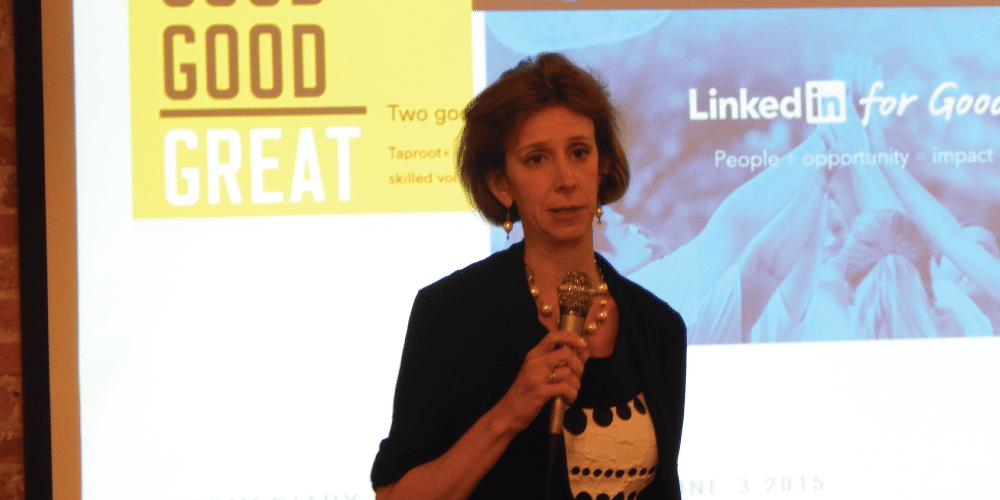 The Board of Directors of the Taproot Foundation announced today the appointment of Liz Hamburg as the organization’s second president and CEO, effective February 1, 2014. Hamburg replaces founder and former president and CEO Aaron Hurst. 13 years ago, Hurst imagined a vital pro bono movement in the nonprofit sector. That vision became Taproot, a leader in the pro bono movement and a catalyst for the $15 billion pro bono marketplace.

Throughout her 20-year career in both the nonprofit and corporate sectors, Hamburg has demonstrated strong entrepreneurial leadership, with extensive experience starting and growing innovative businesses both in the U.S. and international markets. Hamburg has broad nonprofit experience both as board member/chair and as a mentor to non-profits and social entrepreneurs, and can take Taproot deeper into existing markets and expand it into new ones.

“After a national search of formidable candidates,” says Steve Kirmse, Taproot Board Chair. “Liz emerged as our next leader because of her extensive nonprofit activities and over 20 years of experience in building the scale and impact of innovative businesses. Liz is a high-energy, entrepreneurial executive who is passionate about making an impact in the world. She is ideally suited to lead Taproot forward as the pre-eminent convener in the pro bono movement.”

“I’m thrilled to be joining the Taproot Foundation,” said Hamburg. “I have personally experienced the great joy and satisfaction of offering my professional services to nonprofits and have seen the meaningful effect that pro bono services can have on an organization working to drive social change. I’m so excited to find new and innovative ways to broaden Taproot’s reach even further.”

Hamburg is the founding New York board chair and member of the governing board of the Women’s Initiative for Self Employment, one of the largest domestic micro-enterprise training organizations working with low income women to help them start and grow businesses. She has been instrumental in launching Women’s Initiative’s national expansion into New York after 25 years in the Bay Area. She is also a founding member of the advisory boards of the Brown University Entrepreneurs Program and the entrepreneur board of Venture for America, and has served on the New York Advisory Board of Astia.

Hamburg’s for-profit experience includes serving as president of Upstart Ventures, where she was involved in the start-up and growth of over 15 new businesses, including her most recent venture, ApplyWise, an education technology company providing high school students with college planning tools. Hamburg was a member of the founding management team and director of the board of Vimpel Communications, one of the leading cellular operators in Russia and the first Russian company listed on the NYSE. She has launched new products for Reuters Tokyo and Fujisankei Communications, one of Japan’s largest media conglomerates, playing a leading role in the introduction of Fuji’s Nintendo game software into the U.S.

Hamburg received an MBA from Northwestern’s Kellogg Graduate School of Management and a B.A. from Brown University. In 2010, she attended the Executive Education program in Social Entrepreneurship at Stanford Business School.   ‘