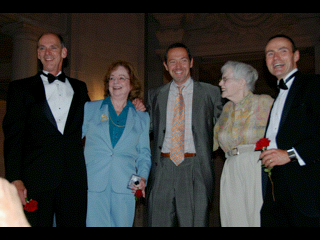 Every year on June 19, the Taproot Foundation celebrates Matt O’Grady Day. This day honors the wedding anniversary of former National Director of Expansion Matt O’Grady and is a celebration of a major milestone in the civil rights movement – the legalization of gay marriage in California. On this 10th anniversary, Taproot invited Matt O’Grady to reflect on the movement, the last 10 years, and the value of an inclusive company culture.

“Sweetheart, give me a kiss!”

With that simple, universal, public display of affection, my husband Steve Van Landingham and I committed a felony. We were standing on the steps of the Supreme Court building in the Federal District of Washington DC. It was April 23, 1993. We had gotten married an hour earlier, in a mass wedding ceremony blocks away in front of the IRS building. Part of the national March on Washington for LGBTQ Rights, the ceremony had doubled as a protest against the prohibition of same-sex marriage. In the Federal District, same-gender kisses were a no-no.

Fast forward 11 years to 2004. San Francisco Mayor Gavin Newsom pulled an audacious stunt and instructed City staff to begin handing out marriage licenses to same sex couples. The resulting frenzy of weddings was quickly shut down by a court, but four years later, the California Supreme Court ruled the state’s ban on same-sex marriages was unconstitutional. The frenzy resumed, and we jumped at the chance to make our marriage legit.

Days earlier, San Francisco’s City Hall had been turned into the Gayest wedding chapel in the country, and officials were cranking out about 400 ceremonies a day. Steve and I had our place in line and invited about 100 friends, family, and—fatefully, it turned out—everyone in the Taproot Foundation’s San Francisco office, where I was their VP of National Expansion. At the top of the grand staircase, Supervisor Bevan Dufty officiated, and our mothers witnessed, beaming like car headlights.

Only later did I learn that Aaron Hurst, Taproot’s Founder and CEO, had heard of this (he was in New York then) and found it unfair that the rest of the Roots across the country didn’t get to join in the celebration. He also saw a golden opportunity to take a step in his ongoing effort to shape the culture of the Taproot Foundation for the long term. He declared June 19 to be “Matt O’Grady Day” at the Taproot and gave every Root the day off with pay. Then he wrote Matt O’Grady Day into the employee handbook as an annual holiday, which has been celebrated ever since.

Of course I was honored when I learned about this. Flabbergasted at first, then honored. It’s the highest honor I’ve had in my career, and doubtless will remain so. But I also quickly realized what Aaron was up to, and he confirmed it when we discussed this a few days later. Matt O’Grady Day isn’t so much about me as it is about the monumental step forward society took in that amazing, unlikely, dizzying series of events. Aaron made a bold statement that it’s that kind of societal change we were after at Taproot, albeit through different, less political means.

He wanted people to read about Matt O’Grady Day on Taproot’s website and think “wow, that’s a place I’d really like to work.” Or volunteer. Or find the pro bono services my organization needs.

Aaron was spot on. Ever since, Matt O’Grady Day has been a defining feature of the Taproot Foundation and what it stands for as an organization. Over the years I’ve had many Roots and volunteers tell me they read about Matt O’Grady Day and were instantly drawn to getting involved.

My husband and I considered both of our weddings to have been monumental. But our 2008 wedding in City Hall carried special weight, for the respect and dignity it bestowed on our loving relationship, by our friends in attendance, by State of California, and by our mothers. But even we thought it was over the top celebrating both weddings. So we decided to combine anniversaries – the year of the first with the day of the second. And so today we celebrate the 10th annual Matt O’Grady Day, and our 25th wedding anniversary.

My, how far we have come. In less time than it takes some couples to fall in love and get married, American society has progressed from treating relationships like Steve’s and mine as felonious to fully recognized nationwide. Wedding cakes notwithstanding. The long arc of history does bend toward justice. Matt O’Grady Day is a celebration of this advance, and a celebration of what it means to be a Root. Now I’m just waiting for it to be declared a national holiday. Any takers?

Inspired by Taproot’s celebration of Matt O’Grady Day? Get involved in your community today.

Matt O’Grady was a Root from 2004 through 2010. He now serves as a nonprofit management consultant and interim CEO. He and his husband are still happily married and living in San Francisco.