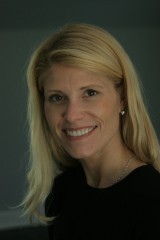 Shannon Schuyler leads the charge in corporate responsibility for Pricewaterhouse Coopers . She finds her passion exploring the role of business and strategy in driving social change, though perhaps to a lesser extent than playing with her two dogs. Taproot is thrilled to welcome Shannon as one of its newly elected board members. I recently had the chance to talk with Shannon and find out a little bit more about her – the person and the professional.

What was your first job out of college?

Oh gosh – that seems like so long ago. Like other folks, I’m sure, there were a lot of twists – I ended up moving to Poe, France and taught gymnastics there for about a year. My mother fell ill and I had to come back to Cleveland. She ended up passing away and she was the last person in Cleveland, so I moved to Chicago where my sister was and had a really hard time finding a job. I wanted to be a sportscaster so I started to do some work at radio stations and then doing some voice-overs for a company. Finally I said “oh my gosh, I’m actually going to have to find a real job,” and so my first salaried job was working at a company that did actuarial recruiting. It was kind of a random couple of years.

Do you find that you still use any of your gymnastics or voice-over skills in your job today?

Gymnastics not as much – though I would say that being involved in individual sports as well as team sports when you are young really helps to build your confidence, and puts you in a position where you’re willing to take risks.

The voice-overs… not as much although the ability to just gab has lasted throughout my career. Voice-overs are different because no one sees you, though it has helped with public speaking, because you learn to control your voice when you need to.

So, you love animals. That came through very clearly the last time we spoke. What was your first pet?

We always had dogs growing up, at least one but typically multiple. My first dog that I can remember was a German Shepard named Baron. His full name, actually, was Alrich Baron von Heidelberg. My dad was a German teacher in college, so they always had to be named in German. Though we always had a lot of pets growing up, I’ve had frogs, hamsters, Guinea pigs… everything.

I’m more passionate about companion animals than animal rights as an issue area though. I’m a vegetarian, but I don’t eat meat because I don’t like meat. I still wear leather shoes.

Switching gears a bit, let’s talk about pro bono. What do you see is the potential for pro bono as you think about the key issues in our country right now?

That is a complete switch! I think that the term pro bono is pretty scary to people right now. Companies are trying to run lean, they don’t have a lot of extra resources on hand. So they think “Really? We’re struggling for revenues, we’re struggling for talent and we’re struggling for time, and now you want to give it away?” It’s sort of seen as something additional to give away during a time when we’ve had to cut charitable donations.

But there’s also a lot of potential. It’s so exciting to be helping redefine this term to a point where businesses can see it as an advantage for them. Whether it’s expanding your business network or enhancing leadership skills of your junior staff, there’s a way to turn it so it doesn’t just seem like free services.

That’s great. So the related question is, you’re incredibly busy. What motivated you to join this board?

Well, I’m passionate about this. I see the future of how this can be so empowering and how companies can actually embrace this to challenge what their shared value is or what they’re able to give back in a very different way. I think pro bono will help business make more meaningful choices and to look at it as something that’s really going to drive their people, drive their brand and help their revenue versus the perception of it today. I’m a real change management, fix-it type person. I think what Taproot has done is so amazing and when I hear the context of how some businesses think about it I think “oh, we’ve got to fix that.”

Check out a full list of our current Board of Director’s.