On Turnip Ties: What Being Playfully Professional is All About 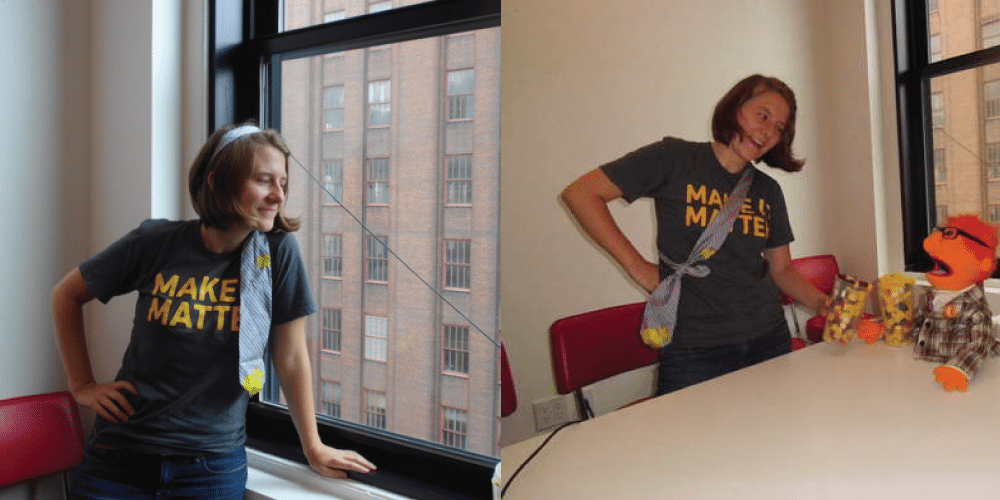 10 minutes to 6 and I was late for the orientation I was giving. My bag was heavy with materials so it was difficult to maneuver through the herds of commuters heading to Chicago’s Union Station. I was trying to push my way past people and construction barriers when a woman walking in the opposite direction brushed past. She did not properly shift her shoulders as the civilized typically do and, instead, slammed right into my shoulder, causing me to drop the bag. There was a colorful explosion and 50 turnip ties flew everywhere.

See, at Taproot Foundation we give each of our new volunteers, or pro bono consultants as we call them, a turnip tie as a small token of appreciation. It’s also a way to introduce them to one of our core values: playful professionalism. No, playful professionalism doesn’t mean bringing a yoyo to the interview or using a hand buzzer at networking events. (Though that would be great, right?) Playful professionalism is really about being yourself. We believe if you bring your whole self to your job each day, you’ll do your best work.

The turnip tie takes what is a typical symbol for a business professional, the tie, and puts a playful stamp on it, the turnip. Tie + turnip = a successful career redefined. We believe that pro bono service should be a part of any successful career and that all professionals should (at least in the proverbial sense) be wearing a turnip tie proudly.

And now, ways to rock a turnip tie:

Where do the turnip ties come from?

Well, when a mama tie and daddy tie decide they love each other very much…
Actually, there is a turnip tie tree that grows in the Northeastern United States….
In a galaxy far far away…

No no, just being playfully professional. They are actually produced by one of our nonprofit grantees in Chicago, Colorburst . They are a fabulous two-time grantee which provides job training to individuals with developmental disabilities, and even feature turnip ties on their website!

It was actually finding the ties that was the real challenge – specifically 3000 unique, vintage ones.

It was my first Taproot assignment and with it I was taken on a fabulous journey through the madness and folly that is the world of men’s neckties. I laughed, I cried, I fell in love with a character I like to call the “tie lady” who was so inspired and passionate about ties, she said she would write up individual “histories” for each one she sold us describing what era it was from and critiquing its fabric design. Her company is called ties2pillows and she seeks out only the very best ties to, you guessed it, make pillows. (This was a strategic product line shift after she realized the demand for “tie sachets” was down.) Passionate, enthusiastic, over the top – you have no idea how much I wanted her to be our vendor.

My manager gently pried me away from my instinct to choose her as our tie supplier due to our budget constraints, but I’ve not forgotten our many conversations where she educated me on the beauty and glory of vintage ties. She was a true playful professional and loved her job.

Integrating personality and values into our work

So to TIE this all together (couldn’t resist), let’s go back to the turnip tie-strewn streets of Chicago. The ties were everywhere. I quickly started scrambling, shoving them back into my bag as crowds of people trampled over them. 5 minutes to 6 and I hurried down the street to make it.

A woman from behind yelled, “Hey – you’re dropping ties everywhere!”

Ugh, the ties were falling out again one by one and I was leaving a trail behind me. I waved to thank her for the warning and ran back to pick them up.

I looked up, pushing my hair out of my face. If memory serves, I believe the clouds parted as well.

“I’d know those ties anywhere!” she said, helping me collect them.

I told everyone at the orientation that night that, yes their ties had unfortunately been trampled on the streets of Chicago. However, they also had proof that the ties would be an instant connection to their 800 fellow pro bono consultants in Chicago and the thousands of others nationwide that have one at home too. Playful professionals unite!

So yes, they’re silly, some are tacky, some are tattered, but they stand for an important principle in any professional’s life – finding your passion and sharing it with the world.

After the story, everyone came up to choose their turnip tie. As I cleaned up from orientation, I realized all the turnip ties were taken. Even the extra… which means that, yes, some took more than one.

Checkout our other founding values.